“The reason we chose Teledex is that it is the most recognized and popular brand of hotel phones.” 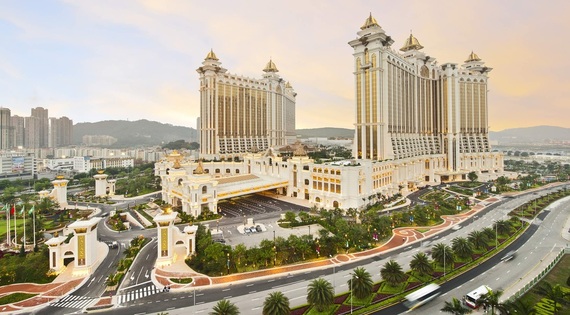 Teledex E Series hotel phones have been selected for the new Galaxy Macau Phase 2 expansion. New hotels included in the Galaxy Macau complex include the 1015-room JW Marriott, expected to open May 27, 2015, and the 254-room Ritz-Carlton, opening in August 2015. The phone of choice for the Phase 2 expansion is the Teledex E203 two-line analog cordless speakerphone, which was selected for both the JW Marriott and Ritz-Carlton hotels.

According to Derek Cheong, Senior Manager of Networks and Telecommunications, Galaxy Macau, “Reaching a final decision on phone sets took some time, however, through our repeated comparison, we selected Cetis from among many competing hotel phone brands. The reason we chose Cetis is that they are the most recognized and popular brand in the field of hotel phones, and because Cetis phones were also deployed at the Phase 1 of Galaxy Macau where we were very satisfied with Cetis products and services. Furthermore, we prefer the design appearance of E Series which is quite exquisite and a perfect complement to the style of our hotel guest rooms,” he concludes. 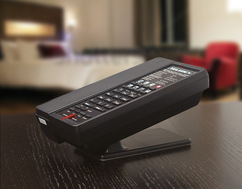 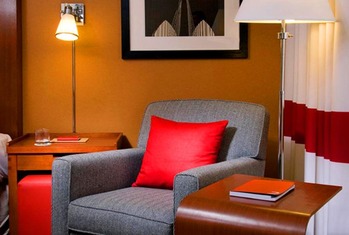 According to Nikolay Beloshitsky of Smarteq (Saint-Petersburg), supplier of the phones and other hospitality products for the four hotels, “Teledex I Series phones are preferred by Starwood brand hotels for quality, consistency, and style, and are depended on by Sheratons and other Starwood hotels across Russia. They are the right fit for these hotels.” 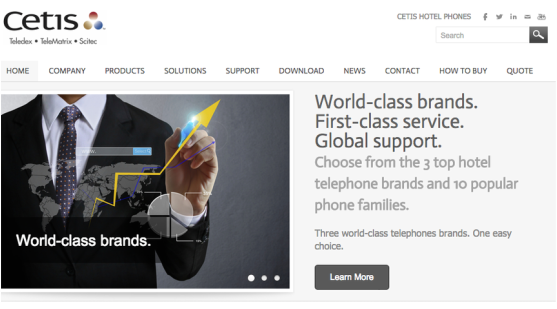 The website features a bright new look and improved accessibility to view and download product and support documents, resource tools, product images, news, and videos. It also serves as a convenient portal for communications with the Cetis sales, support, and marketing teams.

Refer to the Contact page for important contact details, or complete one of the many forms embedded in the website to receive quick responses to your questions, comments, quote request, or how to buy inquiries.

Be sure to click on the social media icons to connect with us on Facebook, Twitter, and LinkedIn. We would certainly like to hear from you. If you have any comments or suggestions regarding the new Cetis website, please write marketing@cetisgroup.com. We look forward to connecting with you!

Hotel Investment Tops $30 Billion in 2014; Average Per Room Cost was $156,002, up 20.6% YOY.
March 9, 2015, Portsmouth, NH – Lodging Econometrics reports that In 2014 total investment in the lodging industry was an estimated $30.8 billion. Of the 1,292 hotels that were transacted 935 reported a selling price into the public domain. The average selling price per room for those hotels was $156,002, up a dramatic 20.6% Year-Over-Year (YOY). The healthy increase in selling prices is due to record-setting hotel revenues and profits, low interest rates and the availability of attractive financing terms. LE foresees selling prices continuing to accelerate for the next several years as hotel performance continues to shine in the absence of any significant new supply. A critical part of the equation is that interest rates, although expected to rise, still remain attractive causing competition to intensify for prized single assets and portfolios.

In 2014 a total of 1,292 hotel assets transacted or transferred ownership. Since the bottoming in 2009 of 528 transactions, total transaction volume over the last five years has ranged between 1,261 and 1,457 hotels. It is a narrow range far distant from the 3,218 transactions and transfers reported in 2007.

In 2014 there were 799 single-asset transactions and another 481 hotels that changed ownership as part of a portfolio sale. A mere 12 hotels were recorded as part of merger activity. It is thought that any significant industry-wide consolidation of companies and brands may still be at least two years away, after the expansion phase of the current real estate cycle concludes and the maturity phase begins in 2017.

Value Of The Guest Room Phone.

Brands
Choose from the three leading hotel phone brands in the world, including Teledex, TeleMatrix, and Scitec.
Click here to ask a question or let us know how we can assist you with your hotel renovation or new construction project.

Have enough spare phones to prevent room vacancies and complaints? Make sure to stock plenty of clean, working Cetis hotel phones, and parts for repairs as well. Between normal wear and tear, spills, sticky keys, and frayed cords, stocking extra parts and phones for easy replacement will prevent a lot of hassle in the long run. We recommend stocking an extra 15% of phones for your guestrooms, plus additional cords and handsets for replacements.

What to do if you lose your mobile phone?
Do: Change the passwords for any accounts saved on your cell phone, ex. banking apps, social media.
Don't: Rack up a bill. Have your service provider freeze your service, so no one else can make calls or hijack your data.